An ancients collector, the plastic revolution has so far passed me by.  This is because I've not much liked some of the ranges from an aesthetic point of view, and other releases have been smaller and not compatible with my existing metal ranges.
However, moving afresh into Napoleonics, with no previous investment, I've found the plastics very much more attractive.  Victrix and Perry are producing some very nice sculpted minis, very cheaply, indeed.  Indeed if the plastics weren't available, I'd have balked at considering the period. 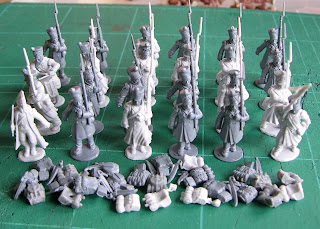 This will be the second battalion of French (after yesterday's Perry's), and is a mash up of 1812 Perry Grenadiers in greatcoats, and Victrix Imperial Guard torsos with spare Perry/Victrix shakos.  I spent a fun evening yesterday trying different combinations, and have managed to put together 24 Grenadiers for a composite battalion c. 1809.

Here are my thoughts, so far, on the Victrix and Perry ranges.

The Perrys are every bit as nice as I expected; very quick to deploy from the box, with most of the rank and file having only 2 parts (body and pack).  They have very little flash and the sculpt quality is everything you'd expect from the Perrys.  I even like the Renedra plastic bases.

I was expecting that I'd like the Victrix rather less.   They do have some issues; rather more flash on the boxes I had, and a brittle plastic that often causes fine pieces to snap as one cuts them from the sprue (I lost 3 muskets in an hour, last night).  They have annoying thick, square bases.  Their minis are in more active poses and more complex and time consuming to assemble than the Perry, with up to half a dozen pieces.  However this last is their strength, as they lend themselves to conversion in a way the Perrys don't so easily.  Heads and arms can easily be swapped between different boxes within the ranges, to produce interesting variants.  They are also cheaper than the Perrys, and willl save me a lot of money where I use their command figures, instead of Perry metal.  Consequently I have developed quite a taste for them!


A great thing about Napoleonic plastics is that the Victrix and Perry ranges are broadly compatible, and can be combined within units to give greater variety of poses, as with the Grenadier unit above.
You'll have gathered, by now, that I am becoming quite a convert to plastic...

For my first dip-of-the-toe into Napoleonics, I'm building an 1812+ French Battalion around 30 minis I bought on fleaBay.  This involves painting 12 from scratch, complete rebasing, and a little retouching.  Hopefully it'll be a gentle introduction.   The original painter was great at painting the fronts of the minis, but didn't bother to paint the packs or turnbacks.  Still, they were a fair price. 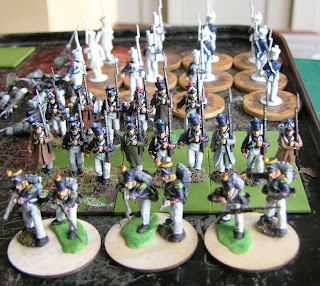 I am re-discovering the joy of turnbacks; these are very slow to paint.  And the facing and edgings are going to be a real pain. In the past week I've bought about 320 Perrys with turnbacks, which, at the rate I find can paint these, is a somewhat nightmarish prospect.
Tomorrow I'll post a picture of the next battalion, which I hope will be very much quicker to paint...
Posted by BigRedBat at 19:46 7 comments:

Another whiff of Black Powder

Muswell Militia had our fourth go at the rules last night, adding quite a few more units, some terrain and Matthew, a fourth player.

Republicans advance towards a French-held farm.  A column of brave lancers, two of militia and a gun. 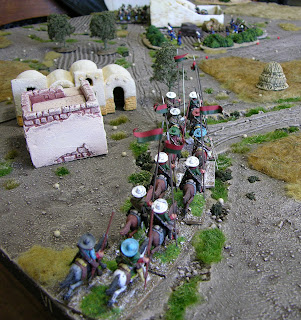 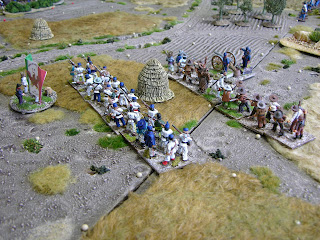 At my end of the table we launched a rapid attack, including a cavalry charge, that was improbably thrown back by the French's Tupi (?) Indian allies (bad dice rolling!).  These worthies then wandered round behind my flank, occupied a building and repeatedly disordered my other units with a galling bowfire (! below).  My attack, which had appeared unstoppable, ran out of steam... 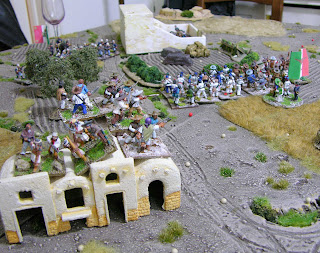 At the other end of the table (below), in the distance, the French relief force pushed aside the Republican holding force, and we reckoned it an Imperialist win.

We enjoyed the game but I did get frustrated with the lack of structure in the rules.  There was an awful lot of flicking back and forth through the rulebook, that really shouldn't have been required.  That said, we will be seeking out some quick reference sheets and playing again next week!

PS there is a much fuller write-up at mate Dr. Simon's site.
Posted by BigRedBat at 20:26 No comments:

I've been drafting plans for my expansion into Nappies.
Firstly, I have a single battalion of nicely painted 1812-era Perry French, bought on eBay, who need an extra 12 figures to round them out.  I've decided to go with the Perry plastic box organisation (into 36 man units, plus 6 extra voltiguers in skirmish poses), and I'll be dipping, in a pale imitation of Saxon Dog's excellent technique.  Incidentally came across and linked to Squadpainter's site which has a very good description of the same method.
Then I want to paint a big 8-gun battery (without limbers) of Foundry French artillery.  These are bought and prepped, and I have a cunning plan for them, involving 2 cans of spray paint.
After that I have the 200-odd Painted Victrix minis I bought on eBay in March (below), that need retouching and re basing, and more figures painting so that I can reorganise them into 4 correctly-sized battalions; I aspire to a brigade worth of infantry of infantry, and 2-3 regiments of hussars.

After that I want to do a brigade of Perry French, with a twist.  1 regiment of 4 battalions.  I might bump these above the Victrix, as I hope I can churn them out very quickly.   I have bought or ordered 7 boxes of Perrys, and 10 packs of metals, gulp...
Helmuth con Molkte (the elder) once said "No battle plan survives contact with the enemy", and I'm sure this one won't, but it is at least a plan!  Yesterday I cut my first Perry's off their sprue...
Posted by BigRedBat at 10:48 4 comments:

Tonight we had out third trial outing of the Black Powder system, using Dr Simon's Imperialist and Revolutionary Mexicans.  This time we added cavalry, artillery and a few special rules, and it rolled along very quickly and enjoyably. 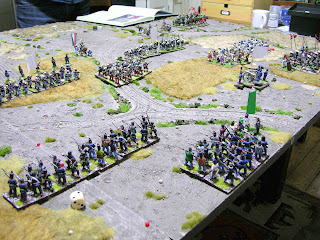 I still think the rules are written in a rather verbose and annoying way, but can testify that they do work well!  Next week we will try a slightly more elaborate game, with a couple more units, and some terrain.
Posted by BigRedBat at 23:33 4 comments: