My other French Army

These are the other French I've been working on; Perry's, this time.  My concept is to have a dusty Victrix army for the Peninsula, and a Perry army for post 1812.
Both the below battalions are largely of figures bought on eBay, painted, and expanded to 6 companies (plus extra voltiguers in skirmish, and a command stand, coming to a total 45 figures each).  Pictures are clickable.

The first unit (above) I've shown previously, but it is expanded and properly based now.   These were the better painted of the two eBay purchases, I'm really pleased with them.

The second unit (above) needed quite a bit of TLC to get them to a reasonable tabletop standard, but I'm now quite happy with them.  Although the painting quality wasn't all that good, the basing was very nice and I've settled on this as a standard.  They are now a reasonable match for the first unit.
Below are voltiguers from a third eBay purchase, who will serve in the next 2 units that still need to be painted.

I eventually hope to expand to around a dozen battalions (I have enough unpainted minis!), but this is going to need some lucky eBay purchases, or the help of Dr Simon's painter mate, to get there.  I'll paint more when I get back from my hols.  Finally, the battalions are shown below, in attack column. 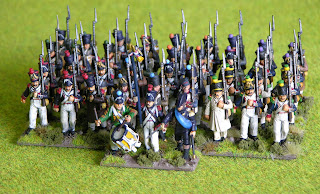 These represent 8 companies of French Grenadiers in Spain around 1809, gathered into two, small composite battalions, as they were at Vimiero.  I've based them on a contemorary print and modern illustration from the Vimiero Osprey. 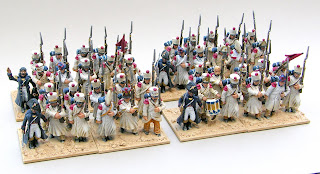 I haven't finished the basing yet, but am pleased with them, and it has been SUCH a long time since I last posted! 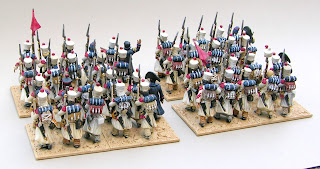 The dustcoats they are wearing were made from linen or white canvas, and were considered more practical than wool in the heat of Spain.  Their tunics are rolled up on the tops of their packs.