A brief and unscientific review of Longstreet 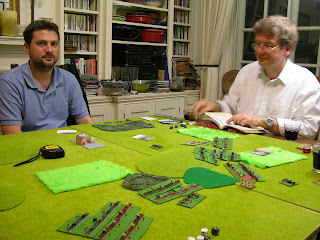 Jay (left) led the Confederate forces, and I the Union. Ian (right) briefly explained the rules to us.

We deployed in two lines facing each other, with half a dozen units a side.  I carefully positioned both of my batteries so that they would have no targets, and Jay did likewise- in fact Jay's guns were masked by his other troops, and remained unable to fire all game!  This was due to our ignorance of the terrain and artillery rules, we'd have a much better idea, another time.

The card play proved easy to grasp, rather easier than Maurice, I thought.   Cards modify shooting, movement, casualties and so forth.  There are also special events played at the start of a turn, and cards that can cause chaos to the other player's movement plans during a turn.

Jay rather sportingly advanced and let me take a pot at him first.  Later he charged: this proved premature, as my boys gave his a bit of a kicking and shot him again, to boot, after he recoiled.  I have formed the impression that one shouldn't charge until either the enemy have been weakened by a firefight, or one has drawn the right hand of cards.

I found some of the cards quite humourous, and there were several attempts at Southern drawls, and much general hilarity, especially as the second bottle of wine of the evening was drained.

As I shot him up, Jay played cards left, right and centre to remove casualties.  Despite this, his losses mounted until I was informed that I was close to victory.  At this point I drew a fabulous hand, and was able to shoot with two additional cards that modified his casualties upwards, and then play 2 more cards to charge through the smoke to hit a unit of Jay's square in the flank, deciding the game. 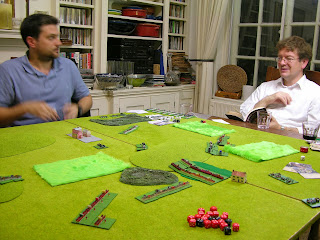 The rules seem very easy to grasp, and by the end of the evening we knew pretty much what we were up to. The cards give the game a very narrative quality, and added a lot of character.  I'll certainly play Longstreet again!
Posted by BigRedBat at 15:44 6 comments: