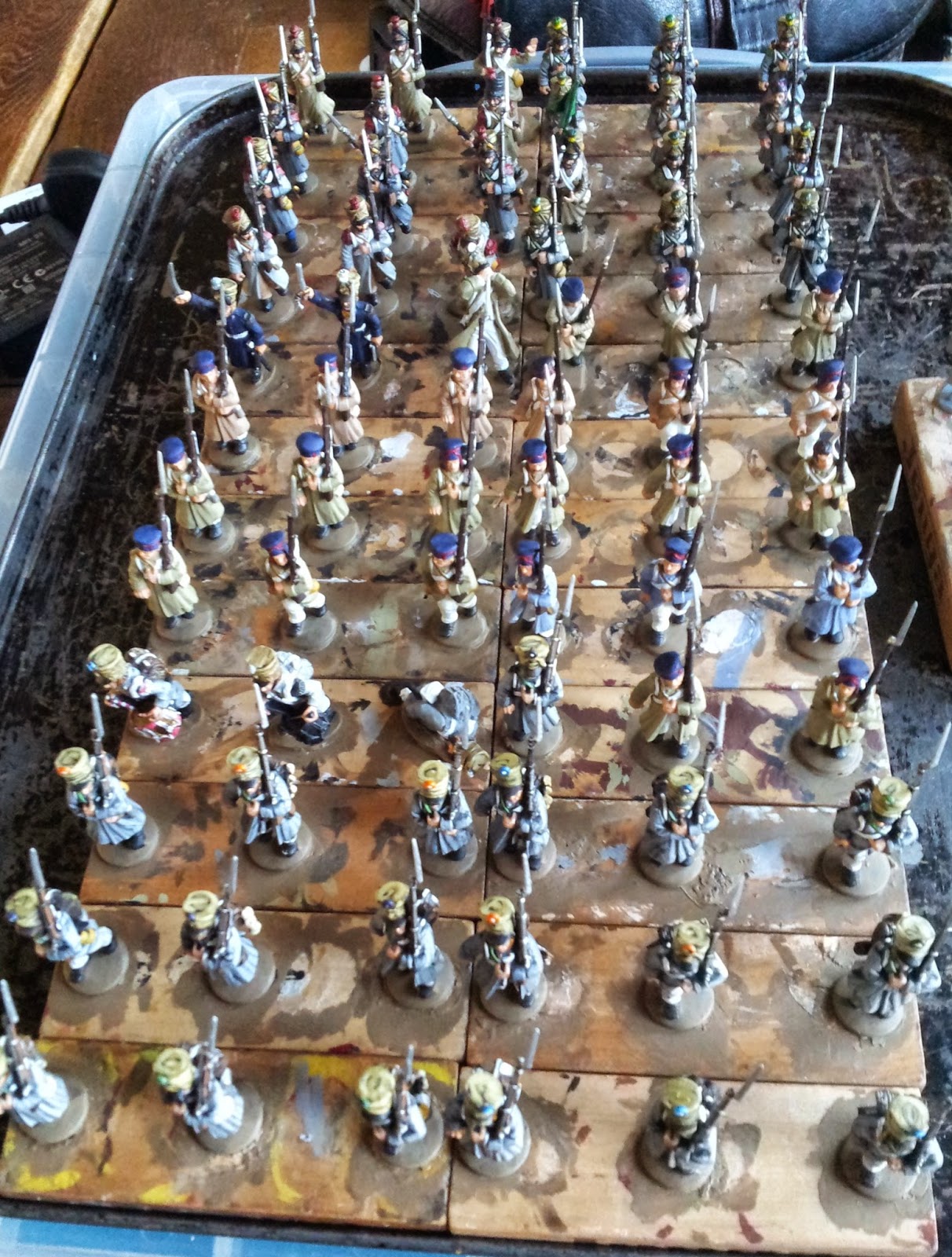 There's a lot of painting in these, even in a chap in a greatcoat!  I've finished another seven painting sessions, so up to 11 now, with perhaps 4 more to go.  15 sessions seems like a lot of sessions for 39 figures painted from scratch and a little highlighting on another 33.  Id anticipated a much faster painting rate on account of the greatcoats.  :-(  However, I think they will look great when finished!  :-) 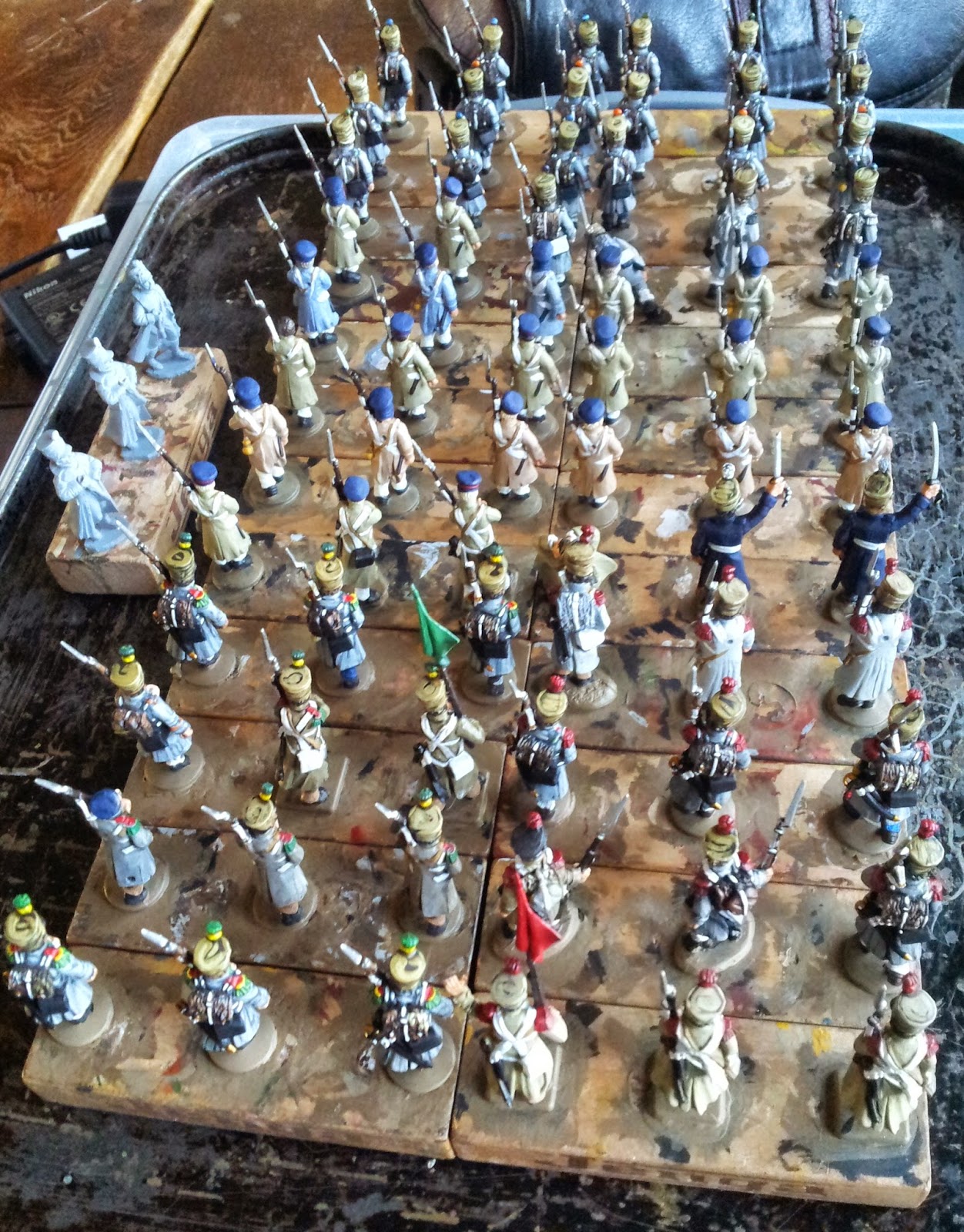 Posted by BigRedBat at 12:29 No comments:

Email ThisBlogThis!Share to TwitterShare to FacebookShare to Pinterest
Labels: Marie-Louises 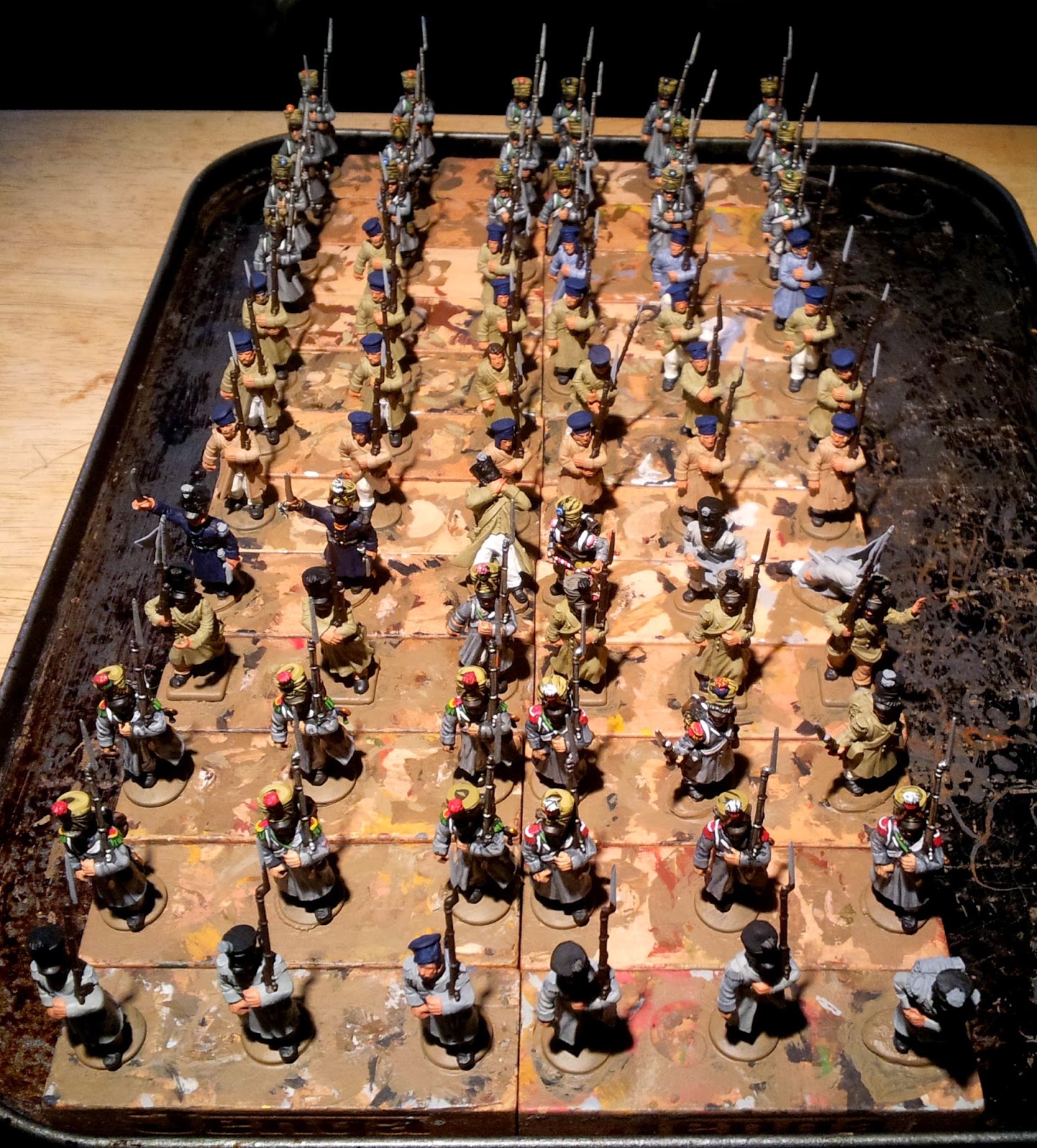 Four painting sessions sees the Marie Louises mostly blocked in, and gradually converging with the mostly-finished figures from David..  Tonight I need to grit my teeth and paint the crossbelts, and tomorrow start on water bottles and bayonets.  There's a surprising amount of work in a bunch of scruffy guys in dirty macks (that look a bit like Frank Spencer).
Posted by BigRedBat at 17:14 2 comments:

Email ThisBlogThis!Share to TwitterShare to FacebookShare to Pinterest
Labels: Marie-Louises 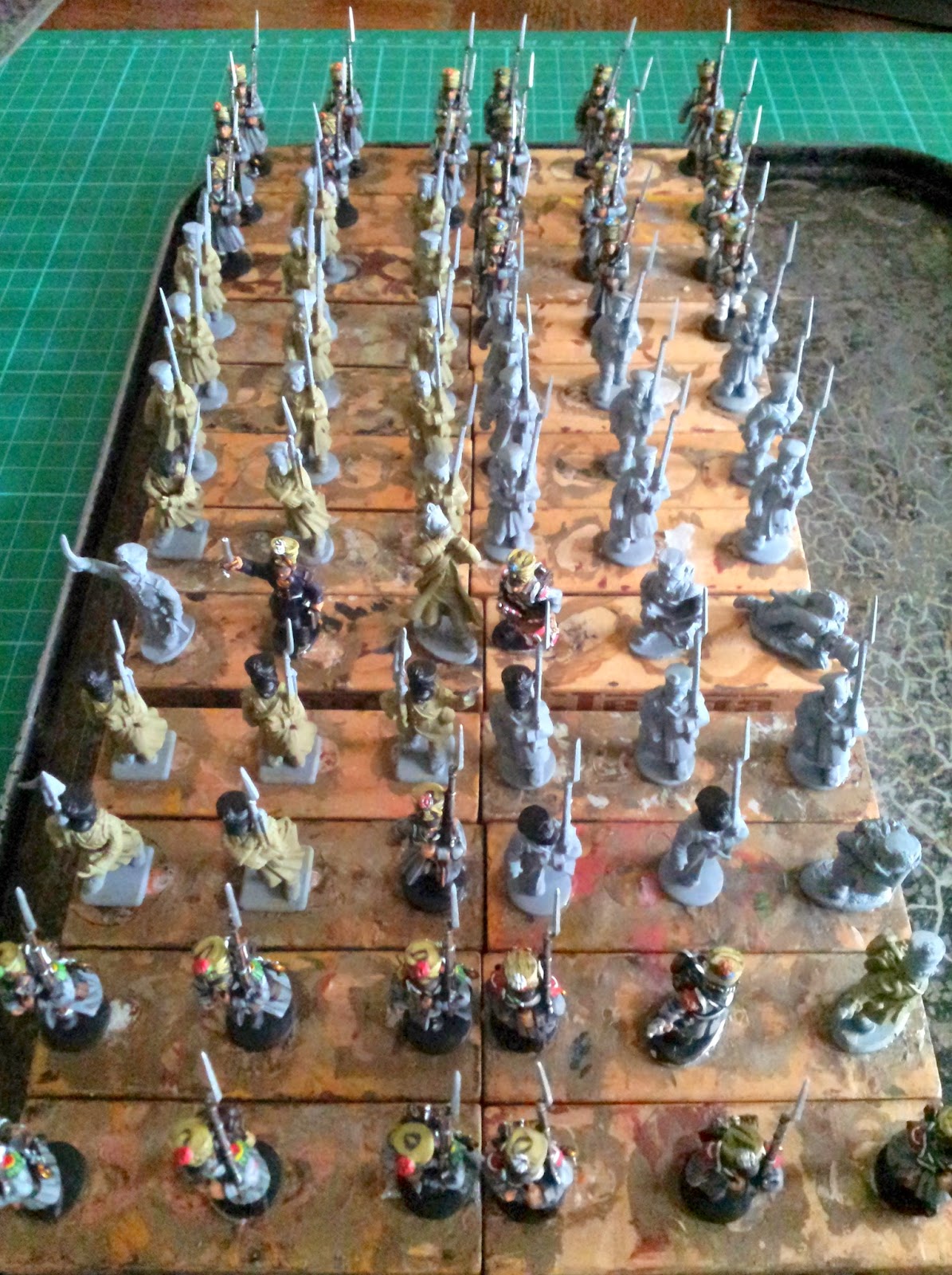 I've put flocking the Young Guard to one side whilst, butterfly-like, I start work on a couple more battalions.

I recently bought a battalion of Neapolitans from David Davies, but my need for French Ligne is far greater and I've decided to re-badge them as French, reserving the distinctive Neapolitan standard bearer, pioneer and officer for a later project.

The rump of the minis from the battalion have been reinforced by a draft of Marie-Louises, the young, poorly equipped recruits drafted by Napoleon around the time of the defeat at Leipzig.  Following an idea from Guy Bowers, I've made these up using the Warlord Late War French torsos and spare heads in pokelem caps taken from the Warlord and Perry plastics sets. 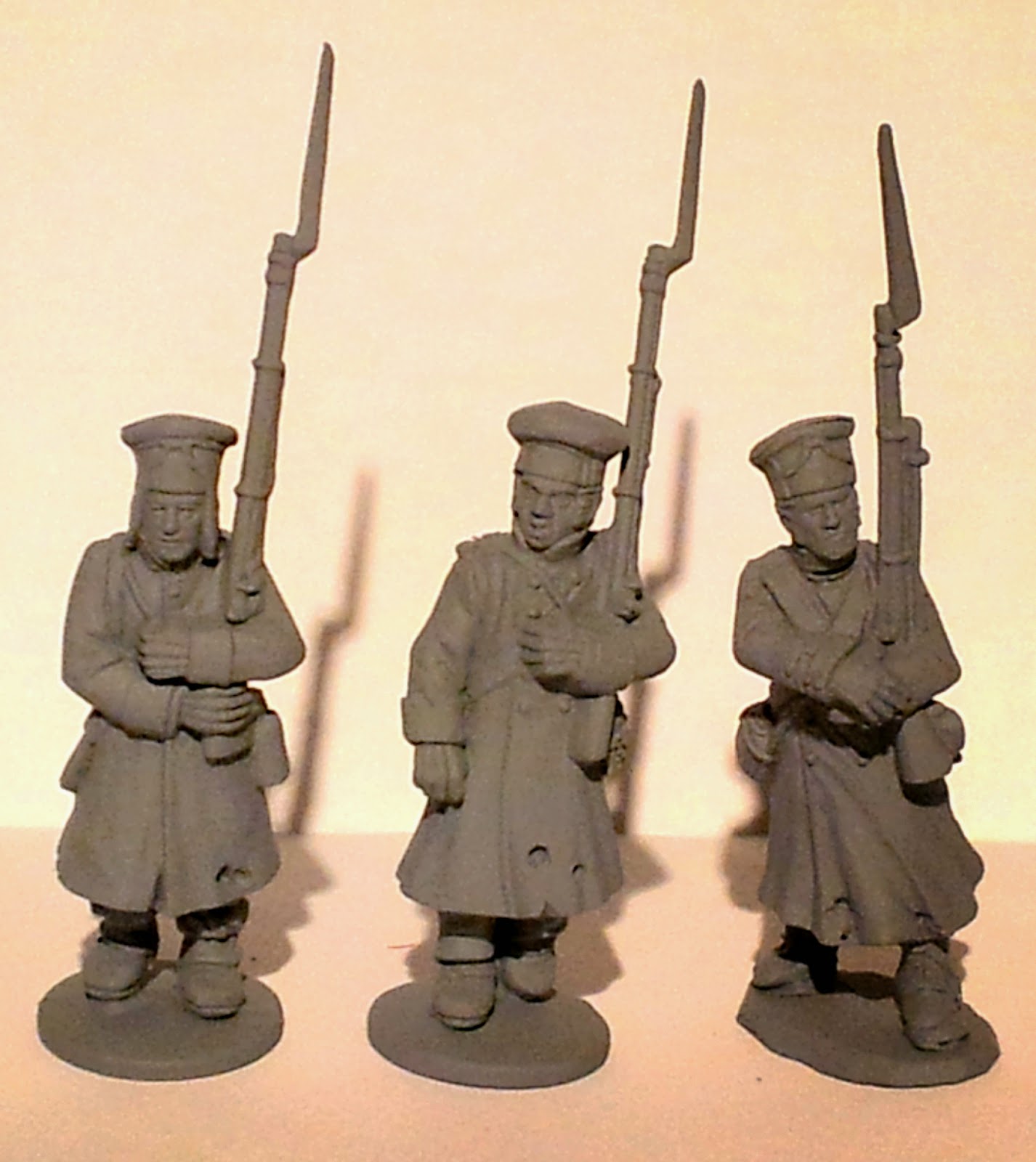 I'm going to paint the greatcoats on the recruits in khaki and an off-grey shade to give what will now be two battalions an irregular appearance.

Here are three of the Marie-Louise recruits.  The two on the left have Warlord bodies, and the one on the right a Victrix body which is a good match for the former.  The centre head is Warlord, and the other two Perry.  I've distressed the greatcoats with drill and craft knife, to give them a ragged appearance.  They should be relatively quick to paint!
Posted by BigRedBat at 13:06 6 comments: 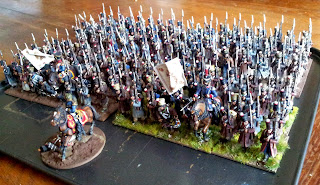 Another work in progress shot of my Young Guard Tiralleur Brigade, now on their bases and grouted. The three Batallions of recruits have now joined the veteran battalion in the foreground (based back in 2012). The minis were painted by David Davies with some finishing and weathering by me.

I've already painted a few test minis for a first Guard Voltiguer Battalion; this has to be done! A matching Brigade of Voltiguers would be a fine thing, they have great red flags that would complement the above.
Posted by BigRedBat at 11:12 8 comments:

I've finished retouching, weathering and varnishing the Tiralleurs, and am ready to base them, so more anon. 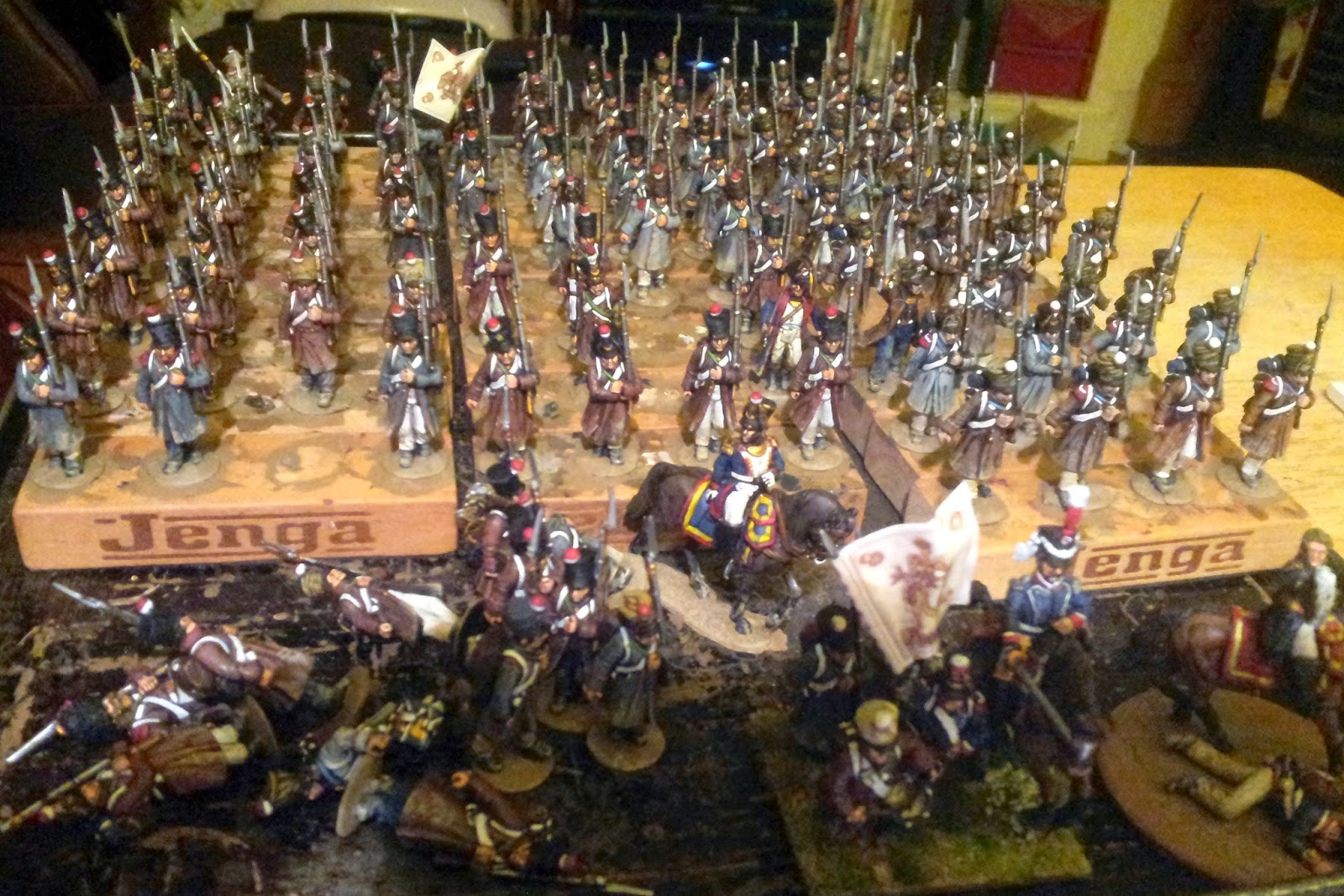 A sufficiency of Perry plastics, and a potential swap.

...so I have been making steady progess with finishing the Young Guard, and had been starting to fret that, at the current rate of progress, I would run out of unpainted Perry Napoleonic French plastics some time in late 2019. However I checked the loft and found another 4 unopened boxes, so that should time me over until the early 2020s!  ;-)

I am particularly keen to get hold of the Perry French figures in greatcoats.  Would anyone out there like to swap their spare greatcoated figures, for their Bardin-wearing equivalents, or plastic Victrix?   I can take as many as you want, or can spare... please drop me a line at simonmiller60 (at) gmail.com.
Posted by BigRedBat at 17:49 2 comments: