The erstwhile albino frogs (and their blue-coated officers) have been dipped and are starting to look rather better (phew!).  They need some highlighting, packs and a few details, like rank chevrons on their sleeves, and then they'll be done, which is just as well as they took at least twice as long as I'd hoped.  And worse, I've decided I need to paint a dozen more to make 2 units of 24. 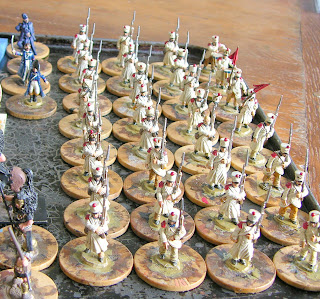 However, they have been so slow that they have been "bumped" from the painting queue, because I need to finish some Romans for Greg's "Big Parade" challenge; I want to deploy my complete Early Imperial Roman Legion, for the first time.
Posted by BigRedBat at 19:49